The Very Best Blues Brothers Tribute Acts in the UK

The Blues Brothers is an American blues and soul revivalist band founded in 1978 by comedians Dan Aykroyd and John Belushi as part of a musical sketch on Saturday Night Live. Belushi and Aykroyd fronted the band, in character, respectively, as lead vocalist 'Joliet' Jake Blues and harmonica player/vocalist Elwood Blues. The band was composed of well-known musicians,[1] and debuted as the musical guest in a 1978 episode of Saturday Night Live, opening the show performing "Hey Bartender", and later "Soul Man".[2]

In 1978, the band released their debut album, Briefcase Full of Blues, and opened for the Grateful Dead at the closing of Winterland Arena in San Francisco. They gained further notoriety after spawning a Hollywood comedy film in 1980, The Blues Brothers.

After Belushi's death in 1982, the Blues Brothers continued to perform with a rotation of guest singers and other band members. The band reformed in 1988 for a world tour and again in 1998 for a sequel film, Blues Brothers 2000.Read more on Wikipedia 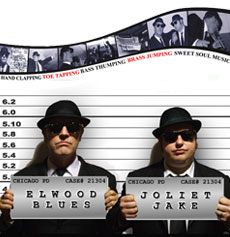 The Blues Brothers On a Mission was conceived and executed with one goal in mind... to create the perfect party show for ANY age group. 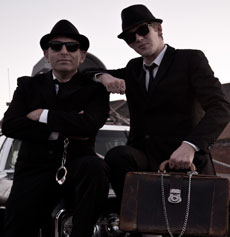 The Birmingham Blues Brothers are a fully professional and authentic Blues Brothers Tribute duo, who have been working in the UK and overseas for the past 12 years 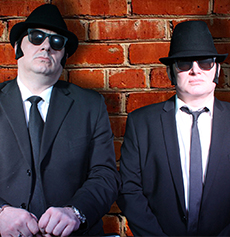 The Soul Men really capture the essence of what a Blues Brothers show should be. Having watched, loved and studied the movie since it first hit the big screen in 1980 it certainly shows.