The Very Best Bono Tribute Acts in the UK

Paul David Hewson, KBE OL (born 10 May 1960), known by his stage name Bono (/ˈbɒnoʊ/), is an Irish singer-songwriter, musician, venture capitalist, businessman, and philanthropist. He is best known as the lead vocalist and primary lyricist of rock band U2.

Born and raised in Dublin, Ireland, he attended Mount Temple Comprehensive School where he met his future wife, Alison Stewart, as well as schoolmates with whom he formed U2 in 1976. Bono soon established himself as a passionate frontman for the band through his expressive vocal style and grandiose gestures and songwriting. His lyrics are known for their social and political themes, and for their religious imagery inspired by his Christian beliefs. During U2's early years, Bono's lyrics contributed to the group's rebellious and spiritual tone. As the band matured, his lyrics became inspired more by personal experiences shared with the other members. As a member of U2, Bono has received 22 Grammy Awards and has been inducted into the Rock and Roll Hall of Fame. Read more on Wikipedia 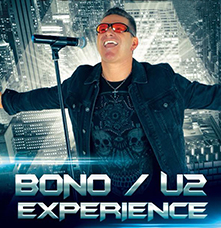 All the very best U2 songs are performed by the amazing Joe Tilly in his tribute show to one of the most iconic bands in recent years U2. Joe’s solo performance is creating a buzz in the venues he has

If you, like us, love Bono and would like to book a Bono tribute act for your party or event then please feel free to get in touch with us today! Our Bono tribute acts operate all over the UK.