The Very Best Boy George Tribute Acts in the UK

Boy George is an English singer, songwriter, DJ and fashion designer. He is the lead singer of the pop band Culture Club. At the height of the band's fame, during the 1980s, they recorded global hit songs such as "Karma Chameleon", "Do You Really Want to Hurt Me" and "Time". George is known for his soulful voice and his androgynous appearance. He was part of the English New Romantic movement which emerged in the late 1970s to the early 1980s. Read more on Wikipedia 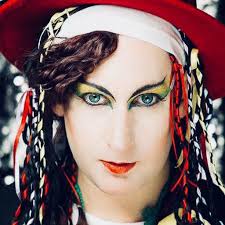 Stunning attention to detail both visually and audibly make this tribute really special. Not many tributes out there take so long in make-up. Just...  Wow!