The Very Best Jersey Boys Tribute Acts in the UK

The Jersey Boys are an American rock and pop band that became internationally successful in the 1960s and 1970s. Since 1970, they have also been known at times as Frankie Valli and the Four Seasons. In 1960, the band known as The Four Lovers evolved into the Four Seasons, with Frankie Valli as the lead singer, Bob Gaudio (formerly of the Royal Teens) on keyboards and tenor vocals, Tommy DeVito on lead guitar and baritone vocals, and Nick Massi on electric bass and bass vocals. Read more on Wikipedia 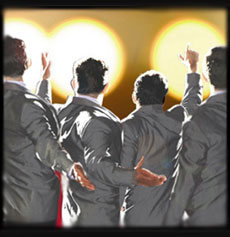 Four young, good-looking, clean-cut guys. One with a fabulous falsetto. the others all great vocalists too. The moves, the suits and of course the wonderful songs.