The Very Best Michael Buble Tribute Acts in the UK

Michael Steven Bublé (IPA: /buːˈbleɪ/ boo-BLAY; born September 9, 1975) is a Canadian singer, songwriter, actor and record producer. His first album reached the top ten in Canada and the UK. He found a worldwide audience with his 2005 album It's Time as well as his 2007 album Call Me Irresponsible – which reached number one on the Canadian Albums Chart, the UK Albums Chart, the US Billboard 200, the Australian ARIA Albums Chart and several European charts. Read more on Wikipedia

Having performed in venues for the last 20 years across the UK, Joe decided to devote his time to perfecting his tribute show to possibly the best-known swing singer globally. 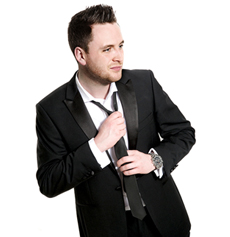 Nearly Buble's show captures everything that the real star is famous for - amazing vocals, cheeky sense of humour and a supercool attitude.